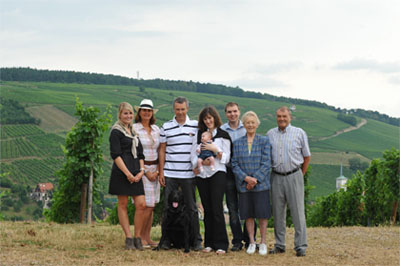 Martin Klipfel creates the Klipfel Domain in 1824, which is now a family estate covering 40Ha. In 1830 Martin acquires the prestigious Clos Zisser.

His son Eugène and grandson Louis Klipfel bring significant growth to the family business.
They were amongst the first to start producing « Vendanges Tardives » (late harvests) and « Sélection de Grains Nobles » (selection of noble grapes) as soon as 1921 on the Clos Zisser and on the Kirchberg of Barr, more than sixty years before the official appellation of these two vineyards.

Further developed by André Lorentz (former member of the Académie du vin de France, the renowned Academy of French wines), the family business is today run by Jean-Louis Lorentz-Klipfel as well as by his daughters Anne-Sophie, Marie and Amélie.

Every year 1.500.00 bottles are commercialized. 20% of these sales are due to exportation to more than 25 countries, especially throughout Europe but also to the United States, China, Russia, Australia etc… 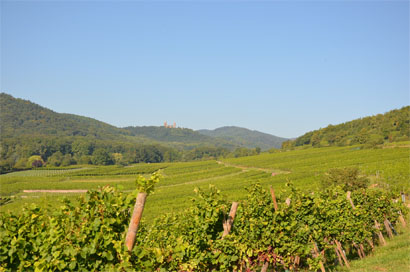 The Alsace Wines are special in that they take on the names of their grape variety: Sylvaner, Riesling, Pinot Blanc, Muscat, Pinot Gris, Gewurztraminer, Klevener de Heiligenstein, Pinot Noir.

Our Alsace Crémants  are elaborated according to the traditional blending method, or come from a single grape variety, such as our Crémant 100% Chardonnay, Crémant Rosé (100% from Pinot Noir) or Blanc de Noir (white wine produced from black grapes).

The classifications of « Vendanges Tardives » and « Sélections de Grains Nobles » can complete the appellations « Alsace » or « Alsace Grand Cru » and stand for over-ripened grapes. The wine varieties that can obtain these classifications are the Riesling, Pinot Gris, Muscat and Gewurtztraminer.
A line of « Eaux-de-vie de fruits » spirits and fruit liquors completes our cellar.

Our exceptional soils, on which our Alsace « Grands Crus » are cultivated constitute the richness of our heritage.

The hillside of the Barr Kirchberg is located at an ideal altitude and exposure, enabling it to be sheltered from the cold northern winds. In all of the wine varieties we can find the mineral aspect and salinity of the Kirchberg as well as acid complexity.

This is the only alsacian vineyard  planted on schist.

The soil of this area is well drained because it is sandy. It warms up easily thanks to the steepness of the slope which enables it to profit from the heat restored by the rocks.

The Clos Zisser is located in the middle of the Kirchberg of Barr covering a surface of 3,5 Ha.
The soil is marly-calcareous ; it is a shallow soil with plenty of rocks. Thanks to its exceptional soil, its climate and exposure, we are able to produce the finest quality wines with great aging potential, such as our « Vendanges Tardives » (late harvests) and « Sélection de Grains Nobles » (selection of noble grapes).